Learn the difference between "intuitive thoughts and physical emotions." They can guide you to your highest good. Intuitive living produces creativity and peace, not fear.

Simply stating (perhaps oversimplifying) living intuitively is using your sixth sense in your everyday living. Keep in mind the expression of being intuitive can mean different things to different people. A mother's instinct that often proves true is being intuitive. Yet her intuitiveness may not go beyond her immediate life and those of her children. Others may refer to well-known psychics such as Edgar Cayce or Arthur Best as being intuitive. Everyone can learn to live intuitively, but not everyone receives answers about other people's lives, probably very few actually are intuitive to that extent. 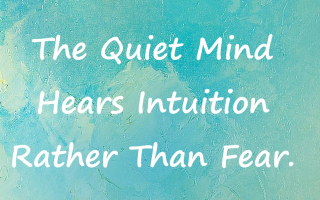 Learning about your own intuitiveness is where the trickiness begins. Learning to understand and trust your "gut" instinct as something you should act upon, requires learning to pay attention and understand yourself and practicing receiving, without reacting. For example, just because you get a really bad feeling when you meet someone, does not necessarily mean that the person is a serial killer. It may mean that there is something about the person that triggers a negative memory from your subconscious that has nothing to do with the person you just met. However, the information - that initial instinct - may still be important in understanding yourself and helping you make decisions about yourself. Plus, there is always the chance that the person who sent your emotions into a tailspin really does have something to hide. So just be aware of what you are feeling and what is going on around you.

Growing into a more intuitive way of living will actually teach you to pay more attention to what is going on around you and your own inner thoughts and feelings, thus allowing you to be more open to the obvious as well as the less-than-obvious possibilities and obstacles you face.

Some people find it easier than others to develop intuitiveness. In fact, there has been some evidence that the sensitivity toward being intuitive runs in families. If this is the case, my guess is that eventually, science will figure out the brain connection of why some people are more naturally intuitive than others.

Intuitiveness may come in the form of sensing or feeling something (for me I describe it as a "swishy" feeling that just passed through me); heightened senses such as smelling, hearing, and seeing things others do not see; and having meaningful nighttime dreams that actually guide you in one way or another. I do want to caution you again that just because you have strong emotions about something, you need to figure out the "why" you are having the emotions. Are you tapping into your sixth sense or do you have an anxiety disorder and your emotions are coming from some hidden crisis you buried in your subconscious. However, that knowledge is still valuable.

My personal intuitive abilities have mostly been centered around my own life and those of my family. Occasionally, unannounced or not sought after, they may be about someone else, but not frequently. For example, whenever I was pregnant (I have 8 children), I would dream about whether or not I was carrying a boy or girl. My husband and I would decide on baby names before the baby was born based on my dreams (this was before ultra-sounds). I really didn't think this odd. My brain (subconscious mind) knew what my body was nourishing. I really didn't see it as some amazing spiritual experience. It was just something that happened.

I personally pay close attention to my dreams and usually keep a dream journal. Dreams use a lot of symbolism, so they often cannot be taken at face value. They need to be figured out if they seem meaningful enough to put forth the effort. I don't personally subscribe to some of the theories I have read in many books. Dreams are very personal. I believe two people can dream about similar things, yet they may mean something very different to each person. For example, if two people dream about a snake, one person may have a pet snake and the dream means something positive, while the other person is terrified of snakes and the dream has a totally different meaning.

Dreams are only one way someone may experience being intuitive. More on dreams will be written in my next post. The important aspect is to try and become perceptive on whether your feelings come from a buried negative part of your subconscious mind or what I call the Sacred Mind, which to some would be called their higher consciousness.

This is only a preview. Your comment has not yet been posted.

The letters and numbers you entered did not match the image. Please try again.

As a final step before posting your comment, enter the letters and numbers you see in the image below. This prevents automated programs from posting comments.

Having trouble reading this image? View an alternate.

(Name and email address are required. Email address will not be displayed with the comment.)